Join us to learn about:

You will have a chance to ask our multidisciplinary team any questions!

Can't make it? Send your questions in one of our social channels or to ucruas@gmail.com!

RIVERSIDE -- UC Riverside recently hosted their first Aerospace Conference entirely initiated and led by students. With over 250 registrations and 168 live attendees, the event was a massive success in providing both UCR and local high school students with a unique opportunity to learn about the resources offered here at UCR related to the aerospace industry. Students had the chance to network with recruiters from prominent aerospace companies including Boeing, NASA, Relativity Space, and Northrop Grumman, as well as UCR alumni from JPL, SpaceX and Raytheon. Three award-winning projects were also featured - Aerospace Systems, Highlander Air, and UCR Unmanned Aerial Systems - along with two student-led workshops.

The event took place on Saturday, April 17th, 2021, at 11 AM. As people began to log onto Hopin, the event’s host platform, event co-founders Pengchi Xiao and Kenneth Chew kicked off the event and introduced the event’s featured speakers: Dean Chris Lynch of BCOE, Dr. Hossny El-Sherief, and Priyanka Kompella of Relativity Space. As the event progressed, participants learned from various alumni and employers, gaining insights into life within the aerospace industry and advice on how to start their journey towards a career in aerospace. There were also showcases of three UCR student projects and two workshops that connected students with existing professional and technical opportunities at UCR. Finally, the Aerospace Conference concluded with the exciting raffling of Amazon gift cards and a brand-new 3D printer.


This conference was planned and hosted by the students at UCR Unmanned Aerial Systems (UCR-UAS), Management Information Systems Society (MIS Society), Aerospace Systems, the American Society of Mechanical Engineers at UCR (ASME), Highlander Air, and the Institute of Electrical and Electronics Engineers at UCR (IEEE), in partnership with UCR organizations including Launchpad/Blackstones at UCR, Bourns College of Engineering, UCR Career Center. Relativity Space and Launchpad at UCR were proud sponsors of this major event.

“I love aerospace engineering and I want to provide students at UC Riverside with a platform to learn and exchange ideas!” said Pengchi Xiao, one of the co-founders of the UCR Aerospace Conference. Serving as the Business Department Lead at UCR Unmanned Aerial Systems (UCR-UAS), he aspired to bring more value and opportunities to his fellow students, such as professional development, industry networking, and the chance to feature themselves and their work in front of a large audience.

“Especially during these times of hardship where opportunities are scarce and student engagement is low, I want to create a community of like-minded students who are passionate about aerospace to come together and reach a destination beyond our imagination,” Xiao commented. He began preparations as early as January 2021, and with the help from other passionate team members across a multitude of student organizations, began bringing together the foundation of the UCR Aerospace Conference.

Conferences at this scale that are hosted in person are often subject to logistical and technical limitations. However, with the exponential growth in technological accessibility during the pandemic and UCR's rapid expansion of student engagement, these diligent students have achieved something entirely unprecedented. As Kenneth Chew, the Co-Project Coordinator of UCR-UAS and one of the conference’s co-founder, put it, “We really leveraged the online nature of events and gatherings this year to maximize our reach within UCR and our community”.

The student organizers of this conference have also broken through traditional long-standing barriers between different colleges and created an interdisciplinary committee with students ranging from the School of Business to the College of Engineering as well as the College of Humanities and Social Sciences. Each of these members, with specialized skills in financial management, marketing, operations planning, information systems, project management and visual design, have pooled their expertise together to make this event happen.

"Five engineering and one business student organizations were featured,” said Trang Bui, Operations Specialist at UCR-UAS and Operations Manager for the event. “This Aerospace Conference has connected people to the opportunities available at UCR and in this field. It has pushed the industry forward and is a testimony to how students can be part of something more if they truly have the passion for it.”

“This is really an impressive event!" exclaimed Christopher Lynch, the Dean of the Marlan and Rosemary Bourns College of Engineering. "This is entirely organized by UCR students, [they] invited all of the speakers and did all of the conference organization.”

Though the event was originally intended to be held in-person, Xiao believed that hosting the first Aerospace Conference online in the midst of a global pandemic would allow stakeholders to see just how dedicated and resilient UCR students are, being able to stay true to their dreams even during times of hardship. “[UCR] being ranked #1 in social mobility isn’t just determined by the top professors and administrators, it is a collective effort done by all students, staff and faculty, especially during this year where opportunities are scarce,” said Xiao.

According to the UCR Aerospace Conference market research team, which was comprised of business students at MIS Society, over 60% of conference attendees were current UCR students, while about 30% were UCR faculty and friends, with the remaing 10% being prospective UCR students.

In terms of marketing, more than 50 posts were created across various social media platforms, such as Instagram and LinkedIn. Upwards of 200 communication emails were exchanged between the planning committee and potential stakeholders, and an promotional email marketing campaign was performed with almost 10 emails being sent to each of the 250 registrations. The website, https://ucrac.com, was also created from scratch by a talented team of student web designers.

To further emphasize the scale and effort put into this event, over 50 students, professors, staff, and faculty were directly involved with its planning and execution, with a total of 20 meetings driving the couple hundred work hours put in by members of the student planning committee alone. 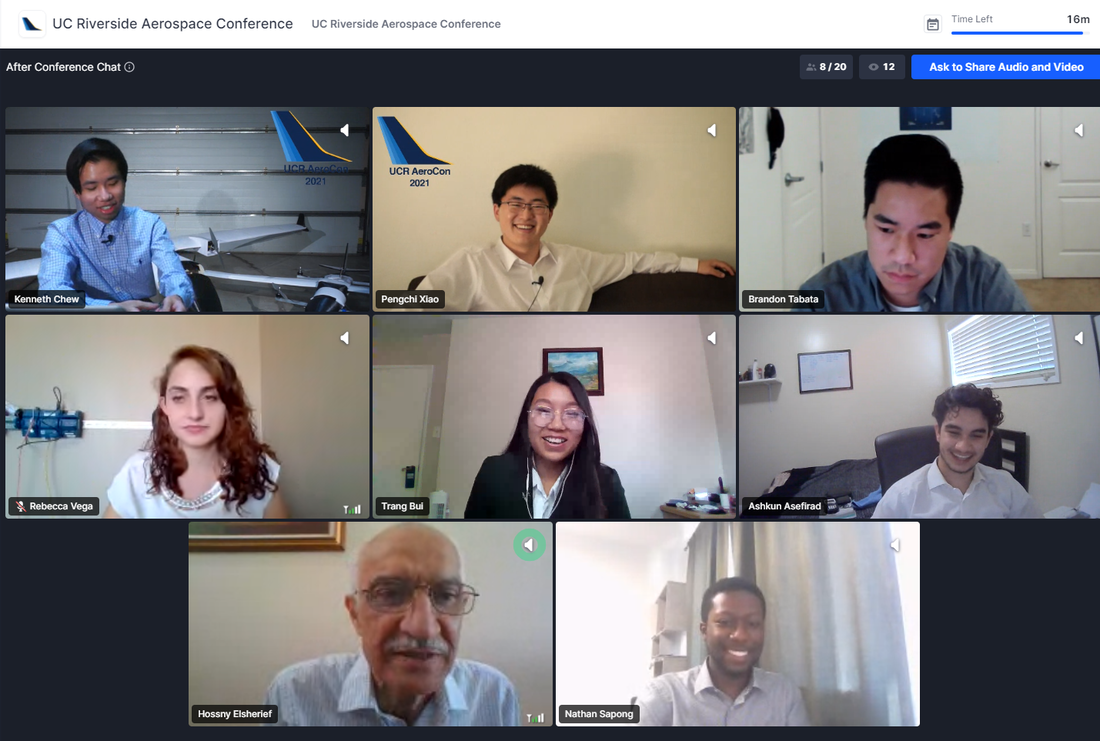 After Conference Chat with Student leaders

For more information on the UCR Aerospace Conference, visit https://ucrac.com.

During Spring Quarter 2021, we hosted a series of workshops to teach students the basics of using Arduino to aid in the the completion of a project: the Endless Runner Game. We covered a number of concepts such as Arduino IDE interface, controlling circuits, LCD displays, photo-resistors, servo motors, and state machines! You can check out all our materials (for free!) here: https://ucr-uas.weebly.com/workshops.html We have plans to repeat this workshop in-person or hybrid during Fall 2021 when we are back on campus. Let us know if this is something you're  interested in! 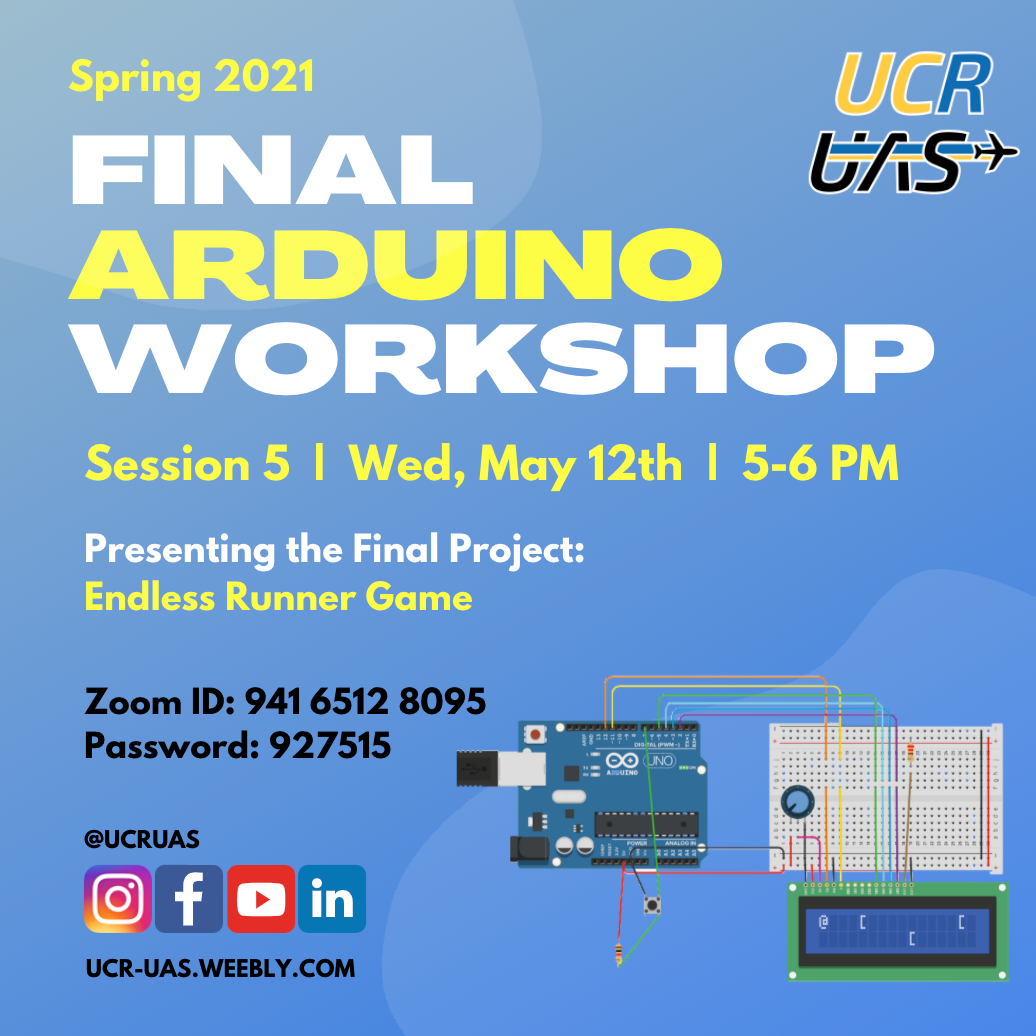